"The ‘Spelling Dictionary of the Azerbaijani Language’ seems to have been complied by uninformed persons." 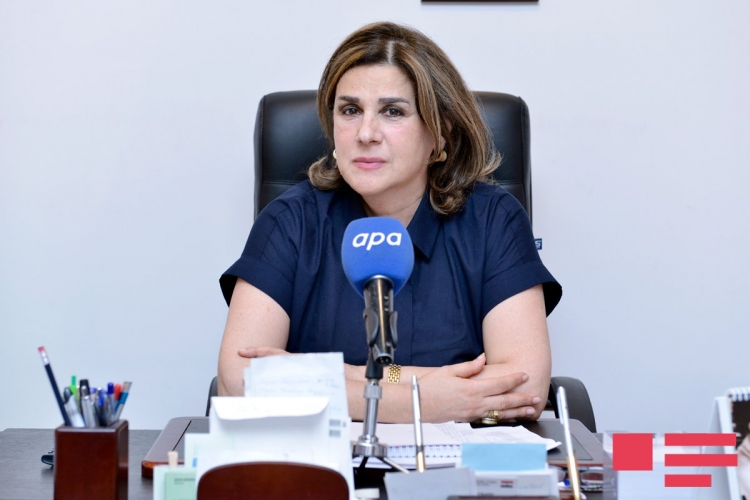 AzTC cannot focus all its energy and efforts on proofreading indefinitely.

Afag Masud, writer and Director of the Translation Centre under the Cabinet of Ministers of the Azerbaijan Republic (AzTC), gave an interview to APA. Here is the full transcript of the conversation:

APA: When you first started, you had particularized challenges and gaps facing the translation industry. What concrete achievements have been made over the past two years?

Afag Masud: As we know, our major goal is to improve the use of the Azerbaijani language and oversee the accuracy of the language and translation by sectors. Allow me to highlight some achievements we have made since then. Suffice to say, AzTC’s Official Correspondence Department has provided about 300 expert reviews for overseeing the use of the Azerbaijani language by government bodies through their official documents and their website’s content. Based on our examinations, these bodies have significantly improved their work in this field. We plan to conduct such reviews once every two years.  But it is certainly not a way out to improve and manage the language and translations through examining and making corrections to the context of a document under such a large-scale and extensive project.  So, AzTC cannot focus all its energy and efforts on proofreading indefinitely. First, we need to improve sources how to manage, use and teach the language, and to form a registry of translation agencies and translators aimed at filtering the translating profession. In addition to mistakes state bodies make while using the Azerbaijani language and doing translations, we can encounter gaps in all fields of language and translation, including all books

, in particular textbooks in Azerbaijani, Russian, English and other languages taught in schools, the “Spelling Dictionary of the Azerbaijani Language”, mass media, as well as billboards and posters for outdoor advertising.

You have been working on the spelling dictionary for a long time. A list of words that are considered obsolete and removed from the dictionary can be found in Aydın Yol weekly newspaper. What is the reason that things reached such a pitch?

Afag Masud:  I should point out that these reviews within the government bodies led us to focus on the Spelling Dictionary. Since errors in the documentations proved to be ones they [the government bodies] had stuck to the Spelling Dictionary throughout the writing. And we understood that unless we address deficiencies in this large format book which must be essential guidance on the correct spelling and form, all our efforts will go to waste.  Since we will continue correcting errors, on one side, the same mistakes will occur because of reference to the dictionary in use, on the other side. But it is like pouring water into a sieve. You must be reading the classification of words. Indeed, we are horrified while consulting this dictionary – it is actually horrifying.  Certainly, we could completely remove thousands of artificially created, misspelled words from the dictionary, but we want to do a properly reasoned job. More than 40,000 words contained in the existing dictionary are obscure, misspelled, Arabic or Persian words we have already stopped using, Russian borrowings that have Azerbaijani versions, numerous names of pharmaceutical drugs, chemical elements, and more.  Some words found in the dictionary are strange – what runs counter to logic is that how they have been created, and why they have been included in the dictionary. For example, “Dartmayaxamcırıldı”, “qaşıyıbqurdunçıxaran”, “meyitatış”, “meyittullama”, “gövdəqucaqlama”, “gövdəqucaqlayan”, “cıbrığınıçıxarma”, “cıbrığınıçıxaran”, and a lot more. Another shortfall in this dictionary is that some words have two or three spellings: “Altun” - “altın”, “yelpənək” - “yerpənək”, “alaf” - “ələf”, “kompyuter” – “kompüter”, “dırmıqlamaq” – “dırmaqlamaq”, etc. Which of these spellings must be correct for the user? The next gross mistake is that thousands of words are misspelled, as if this dictionary was complied by those being unaware of the Azerbaijani language. But it is guidance for all areas of use of the Azerbaijani language, including textbooks, tests produced for all schools and government documents. Expanding vocabulary is certainly a natural process, as new words and terms are continuously invented through literature, branches of science, latest fields of activity and technologies.  However, it is unacceptable to manage a lexicalization process artificially and deform the language with thousands of strange and artificially created words under the slogan “Let’s expand our vocabulary”.

APA: When will the new ‘Spelling Dictionary” be published?

Afag Masud: We at AzTC worked the whole year around on the existing spelling dictionary to take out artificially created words. More than 700 words not found in this dictionary for no reason should be included in the new one. They are words used in literary sources in the 1950s, 1960s and beyond. We intend to discuss the process with specialists before reviving these words. I think there is no rush to publish the new dictionary. We have completed the removal process and the book is being proofread. And the dictionary will mark stress of all the words. I hope we finish the work through the end of this year or by the beginning of next year. It is an academic publication, claiming attention and responsibility. So let us not rush to the publication.

APA: The Institute of Linguistics is responsible for the dictionary, as you know.  Thus, what is their reaction about the re-examination, I mean when you list deficiencies?

Afag Masud: Let us not charge anyone. Those words that are necessary to remove from the dictionary are continuously classified in Aydin Yolissues in consultation with language specialists. We are ready to hear comments from all related organizations and individuals. This language belongs to all of us. We have been receiving many calls and letters in connection with the classification. Everybody is horrified in the bad sense and everybody wonders what sources will be referred to re-compile the dictionary.

APA: Are you satisfied with the language of media?

Afag Masud: It is not possible at this time to examine the use of Azerbaijani on TV and radio owing to a lack of time. Moreover, the situation in this field is plain to see. Television personalities are always misrepresenting words, even letters. For example, the word “layihə” is produced like “lahiyə” by them, public figures, as well as by officials. Another example: “c” and “ç” are pronounced like the Russian “ц”, or “t” is artificially softened like the Russian “tъ”: “tъermin”, “tъibb”, “tъemp”, or words are stressed incorrectly.

APA: What’s your opinion with regard to the language of outdoor advertising?

Afag Masud: As you know, the situation in this field is not heartwarming either. With regard to the use of the Azerbaijani language and translations displayed on advertisement boards and posters, as well as public catering establishments on Baku’s central streets, we are dissatisfied with the process. You can meet numerous rough, sometimes inexcusable errors. In 2015, we sent an official letter to the head of Baku’s Executive Power, offering our assistance to address gaps. We have yet to receive a response. We also sent a letter to the State Committee for Standardization, Metrology and Patent of the Azerbaijan Republic because of linguistic and translation deficiencies, and sometimes rough semantic errors on food item labels.

APA: What about gaps in textbooks? Have you launched any mutual cooperation with Ministry of Education?

Afag Masud: Textbooks have become the order of the day. AzTC has submitted to the  Ministry of Education several projects to draft textbooks, including translation teaching according to international norms and standards, the primary school textbook ‘Azərbaycan dili’ (the Azerbaijani Language) in a new format, and the establishment of  a new body, ‘Standing Board on Textbooks’ to identify textbook compilers. There is such an international experience. In many civil countries, the supreme state bodies define the function of this body. For example, in Sweden, Riksdag - national legislature and the supreme decision-making body of Sweden realizes the government textbook policy.

APA: How do you find the literary translation?

Afag Masud: As literary translation is a creative sphere, it is not done according to concrete formulas, calculations. If ten translators translate a piece of writing, then ten various pieces will be created. Literary translation depends on a translator’s literary thinking and talent; the translator must be familiar with the inner world of an author, or he/she must feel the author’s style and be able to convey his/her ideas. Unfortunately, there are very many gaps in this field, too. There are professional translators, but they are not many. I think it would be more reasonable to spend months, sometimes years on translating a book without causing damage to the language and the originality of a literary work than producing dozens of books within a month one after another.

APA: Where do things stand in terms of the translators’ database?

Afag Masud: AzTC’s main project is to promote Azerbaijani literature worldwide. We published in 2015 a two-volume book "An Anthology of Modern Azerbaijan Literature" in Russian in Moscow, and in July 2016 in Turkish in Ankara, with presentations thanks to organizational support from representatives of literary communities. Another anthology of poetry “Candles: 101 Verses” was presented to Londoners last year. The presentation ceremony was held in Waterstones Piccadilly, Europe's largest bookshop. The publications were distributed among the libraries, scientific and educational institutions and universities in the given countries. We are planning to publish and hold the presentation of the anthology in Egypt, in autumn 2016. Presently, the anthology is being translated into English, French, Spanish, German and Persian. We should confess that the Azerbaijani literature is not so much popular in the world. ‘Khamsa’ by Nizami was the single example of Azerbaijan literature presented in Prague National Library. And the painful side of this fact is that the author is presented as a ‘Persian poet’. In order to re-publish this book we tried to have it in PDF format, but unfortunately, we failed. Now we have to re-translate it into the Czech language. This work takes too much time. Our meetings with ambassadors accredited to Azerbaijan primarily aim to popularize Azerbaijan literature worldwide on a higher level.

APA: Sometimes AzTC is criticized, mainly by those dealing with literary translations…

Afag Masud: I don’t reproach those criticizing us. Many people still remember the Translation Centre as a body engaged in literature. Time will pass and everybody will understand our core functions and aims.

APA: The reason for the rift may stem from the fact, that some are not involved in the translation process. Could you name successful translators whose translations you enjoy reading?

Afag Masud: Vilayet Hajiyev, Vilayet Guliyev, Elchin, late Natig Safarov, Yashar Aliyev, Etimad Bashkechid, Ilgar Elfi, Saday Budagly…our young translator, the winner  of the “Bay Leaf” Literary Translation Award Tevekgul Zeynally, and many others. The doors of the Translation Centre are always open to perfect literary translations. But we should not forget that now we need to popularize our literature worldwide. For me, this is our main duty for today.